We are seeing headlines about tax rate changes. If you are like most people, you’re wondering what’s in it for you? 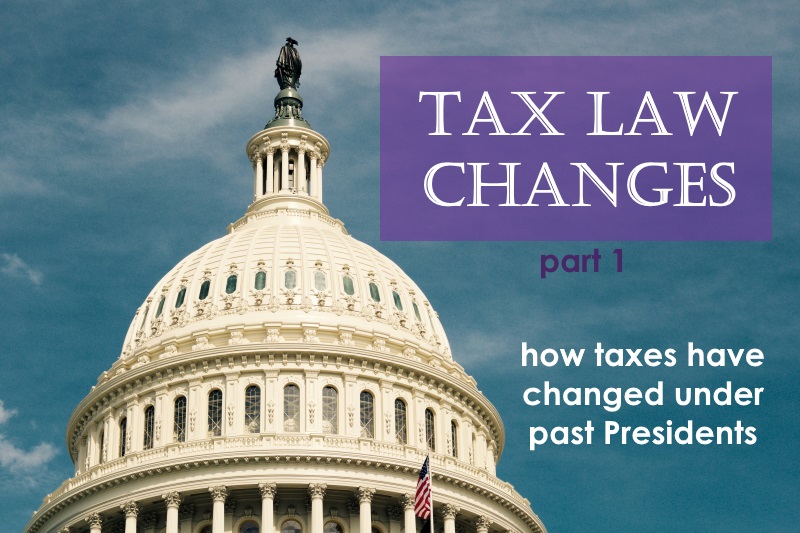 What does the new tax plan mean for entrepreneurs and small business owners?

That is, after 435 House representatives and 100 Senators, having been lobbied by over 11,000 registered lobbyists from various special interest groups and correspondence from their constituents, have attached amendments that created bills passed separately by both House and Senate.

I’ll cover specific changes for businesses in part 2, but today I’d like to share my experience as an adult in watching tax rates change over the last 50 years.

Past Tax Plans and Highest Rates

These are only 7 data points from the IRS individual income tax rates, showing the taxation rate for the highest income brackets. I use these as examples of a recurring pattern.

Rates change, as well as what it takes to be in the “highest” income bracket. Consistently the allowance for deductions has been reduced (same as the Trump tax simplification) and the “rich” has been modified based upon economic conditions at the time.

Of most interest to me is the amount of the economic pie that the government collects: no matter the rate or the highest tax bracket, that amount has hovered in the 18% range of gross domestic production (GDP).

What always amazes me is how little attention is given to the spending side of the equation. The crafters of the bill are focused on remaining “revenue neutral” meaning that the government will still get its share of wallet to provide solutions to the country.

Why not have a trigger that says if there is a deficit of X amount, government will have to spend less? You have to do that with your own budget, don’t you?

My observation is that freedom of choice for taxpayers results in more favorable returns. The stock market, of course,  is only one measure of how the economy is doing.

Since the founding of our country, there has always been a push/pull debate about how much the government should take in and what it should do with the money it receives.

“Reliance on central government begets a slow process of dissolution that cannot but end in the demoralization of government and people alike.”

My hope is that the six who will decide what simplification means keep the Kuyper’s Manifesto in mind. Trying to deal with all these moving parts alone is a challenge for individuals. Just remember when you put “THE” and “IRS” together, it spells “theirs.”

Creating a positive business climate with fewer regulations and more permanency in tax rates helps create an opportunity for the economy to grow.

Helping businesses know what to expect in coming years allows them to make longer-term projections without the uncertainty that tax changes can bring.

¹ Use of the S&P 500 is only one way to measure the economy. The returns cited do not take into account any fees you may incur as an investor. Your personal experience may be more or less for these time periods based on a variety of factors such as the time you invested and when you sold. You cannot invest directly in the S&P 500 index. This is not a recommendation or a solicitation for any investment.