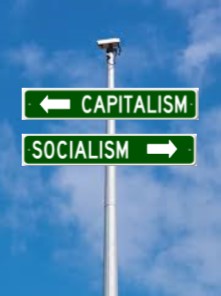 Throughout history, there has been an ebb and flow toward each of these economic models. Each has its flaws as they are run by human beings. We constantly face the dilemma that tugs between “me” and “us” or the greater good.

A recent example of “me” winning out is seen in the corruption that is currently rampant in Venezuela. President Nicolas Maduro has been the power behind the economic collapse of a previously major oil producing country. This travesty was covered in some detail in the Review section of the Wall Street Journal May 26-27,2018. Reporter Anatoly Kurmanaev had been covering the country for the past five years when the petro dollar-fueled party was still raging. “But greed and incompetence of the ruling party soon began to take their toll.” Where the initial premise of socialism may have been for the common good, the greed of the ruling few has taken over the wealth that should have benefited many.

Mr. Kurmanaev grew up  in a socialist ideology in provincial Russia in the 1990’s. This gave him a unique perspective of “been there—done that.” He witnessed waste and excess on his first visit 5 years ago. Today, 9 out of 10 Venezuelans don’t earn enough to meet their basic needs. “It is profoundly depressing to watch people you know grow thinner and more dejected day by day, year after year,” he writes. That is a statement I have never heard when describing capitalism.

Even China has moved toward a form of what I’d like to call “controlled capitalism.” China will always have an agenda and wants to surpass the US as the paragon of economic power. Will that occur in my lifetime? Doubtful. It appears our country has pulled back from its march toward socialism under our previous president and Congressional majority. When US citizens feel tightness in their wallets, they tend to vote for more capitalist-oriented political leaders at the ballot box.  Europe has been far more of a “socialism” economy in my life time.  At this writing, our unemployment rate is half their rate.  That is a lot more people who enjoy the dignity derived from working and having a job.

Socialism in my opinion stacks the deck in favor of central control or “we know what is best for you.” Pursuit of happiness in the form of entrepreneurialism and capitalism is alien to the socialist thinker. Examples of this control may be seen in trade with China.

The Chinese are playing the long game. They believe that technology will dominate the future. Americans, for the most part, sadly tend to be more immediate-focused. “Make me more comfortable today. I like the status quo.”  The Chinese manifest their control using TRIMS—trade related investment measures. If I want to sell something in China, I must partner with a local Chinese company and share my intellectual capital with this partner. Talk about a Mafia-like shakedown.  American companies are giving up their most prized possession –what they know or what they have created—in order to tap into this giant potential marketplace of China. The government sets the rules in its favor.

One of the great strengths of capitalism is that innovation that works is rewarded. It was the desire to control one’s own destiny that drove our forefathers to risk everything to separate themselves from a king. That experiment continues to move forward in fits and starts with the US still in the position of world economic power—warts and all.

Self-interest is a very strong motivator. In the capitalist model, there is more of an opportunity for a greater number of people to benefit, not just a select few. Even on the micro level of our company, I started as an individual and now have grown to nearly a dozen employees. When you add in our Profit Picture® software as a service, that number is even bigger. Providers who help us have dedicated staff people who contribute to the economy without being mandated to do so.

Think about how you interact with a large corporation like Amazon. Do you shop there first because it’s easy and you’ll get delivery in the next day or so? Or do you shop locally, to touch and feel the merchandise and support your local business owner.  Another option that I also see often—shop locally, maybe even try something on, then go home and order online because it’s how you like to do it.  Personally, I think that’s a bit unfair to the shop owner or department store that is still maintaining a brick-and-mortar presence for you. Shopping locally helps keep my property taxes lower. More are sharing the burden of supporting municipal services. Buying online may seem cheaper when you think about the lone transaction but on the macro level, when you consider the consequences of taxes, the sum of the costs may be greater for the individual property owner.

Now that Amazon owns Whole Foods they are actually a part of both worlds—online shopping and local foods. Do you like that Alexa knows so much about you? Or does that make you nervous? There are two sides to that coin. Having a button to reorder when the cat food or laundry detergent is low saves you a trip to the grocery store to pick things up. I find it interesting that although Amazon is driven by technology, it’s categorized as a retailer—one that had 566,000 employees worldwide as of Q4 2017. This is just one example of freedom and innovation at work in a capitalistic society.

You don’t have to be part of the socialist ethos to serve others. You can prosper inside a capitalist society and provide jobs and services to others. You can use your earnings to donate to charities of your choice rather than being required to send your taxes to a centralized entity that may not be the most efficient way of allocating those dollars due to bureaucracy and politicization of decisions. I am thankful for being alive and living in the United States and even more so, Texas—the strongest capitalist state in the US. There are many who are living a much more challenging life.

Ask yourself: Which do I prefer? The freedom to pursue happiness through capitalism and entrepreneurship? Or do I want someone else to mandate my access and my resources from the top down in a socialistic society?