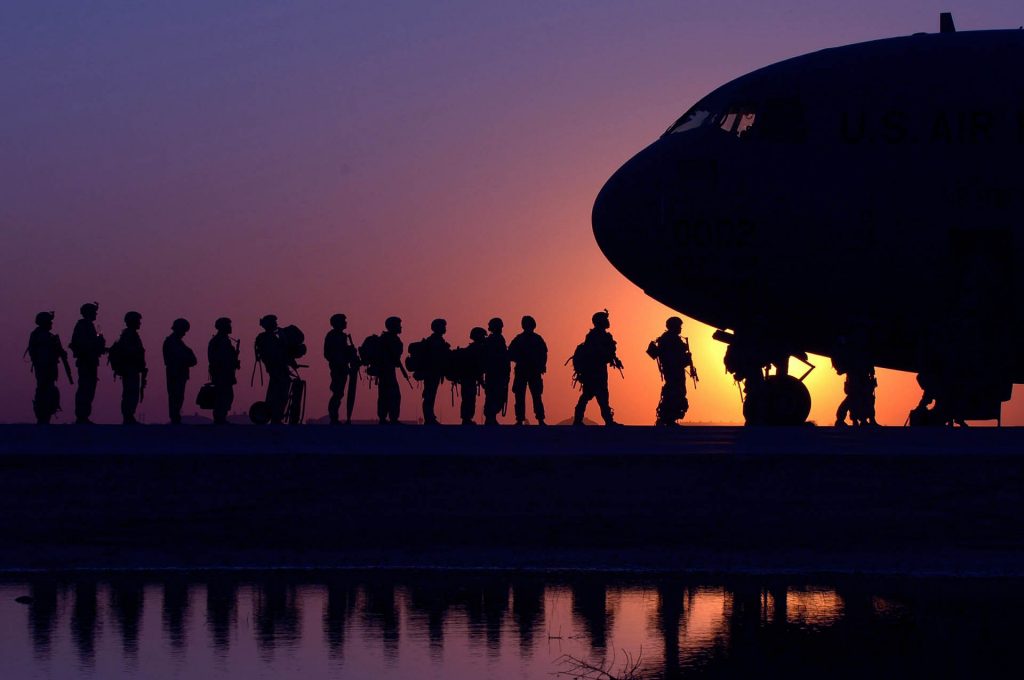 Colleen Affeldt and I are members of Business Executives for National Security (www.BENS.org). We recently went to San Diego to observe and meet SEALS at the Coronado training center.  Something she said struck me as another example of applying the SIFT Coalition discussed in American Fathers. A call to her confirmed my sense of her commitment to impacting returning soldiers’ lives that are having problems transitioning to civilian life. This is the story she shared with me about her journey since 2010 creating  www.coreintersections.com in which she used collaboration and business mentorship to create something that truly changes lives.

At a small dinner with six returning, wounded servicemen and President Bush (43) she listened to their stories of the events that wounded them and their subsequent experience of transitioning from warrior fighter trained to be dropped into a war zone with yes, real bullets flying toward you, being then shuffled into a cubicle and said-go! Any one reading this ever had real bullets shot at themselves?

Colleen quickly realized something was not working. Civilian life shouldn’t be that hard after what these warrior heroes had experienced. She took it upon herself to search out and interview people responsible for current transition plans, searching for the “missing link.

Faulty thinking and poor leadership in any venture assures failure. The unemployment rate for vets is above the averages. There is underreporting of job worthiness of skills and many of the “put vets to work” in the private sector are not able to shift their thinking about being sensitive to the vet transitioning into a “cubicle”, according to Colleen’s research. Sadly, the fact of life is if you have not experienced a certain event it is nearly impossible to relate to one who has gone through a life altering experience. I call this a cultural issue. Differences unresolved very often lead to failure. I have seen this demonstrated in mergers of diverse work cultures. Expectations are unrealistic. Clear boundaries and consequence are not defined as they are for soldiers trained in the military.

The answer Colleen saw was to build tools to use at the intersection of the transition, inserting information to improve the experience. She believes this insight was divinely inspired. Caught up in the flow, doors opened at both the Department of Defense and Labor (DOD & DOL). The last time these agencies had looked at this transition issue was Desert Storm in the Bush 41 era-1992. The Transition Assistance Program was developed before the internet. The same group had run it for nearly 20 years. They were impeded in concrete with their thinking, having never consulted the private sector, unable to modernize.

Visiting military bases in her home state, she met with the Commanding Officer at Carswell where she discovered another recourse-Fleet Family Services. Fleet Services, already there was built and could deliver a final working product. One of her driving forces that gave her purpose was thinking about the population of soldiers whose debt would not be repaid, yet a contribution to the obligation could be made. We all must have a reason to FOCUS, either in a charity, business or life.

At this point, she met the group that would become her partners, an amazing group of retired Army Ranger partners known as the Praevius Group founded by Nate Self, (a key part of SIFT-working together), they set out on one of the first collaborative journeys to address this comprehensive issue. It was this coalition that changed everything.

In an internal meeting about their collaborative program CORE Intersections, they were discussing Self’s book “Two Wars,” a chronicle of his war in Afghanistan and Iraq, and his war with PTSD when he returned.  A Google search of Self easily tells the story of the hero that he is, yet the trauma of his experience haunted him, as it does for so many. It was at this point the CORE Intersections team knew dealing with PTSD needed to be part of their transition program. But they wanted to make a small but significant change – drop the “D” from PTS (D). Post trauma stress is a normal human response to life and death experiences that are far above what we civilians experience in daily living. It is not a disorder.

Working with Nate Self gave Colleen an even stronger purpose and focus in seeing the “D” disappear and she knew just where to go for a champion. Col. Miguel Howe, who had taken over the leadership of the veteran initiative of the Bush Institute. Colleen, who had become a folklore-ic champion of vets, knew she needed someone with much more clout and she quickly leaned on her relationship with Col. Howe and passed the flag for PTS – no D!

Colleen had been attempting to change the government when after too much frustration, the Core Intersections team turned to private industry. One program she specifically mentioned was the GE Jr. Officer training program. The realization that coming from the eyes of who stands to gain, if we are right, go to the corporations that are hiring Vets. Sadly, as lift for their program was occurring, sequestration took a lot of the wind out of the sails. Incentives were dropped and the truth about economics took its toll.

During their journey of collaboration there was a steep learning curve, agreement and alignment with corporate sponsors and their objectives that had to be meshed with the challenges of daily living.

Another window did open up–academic. The GI bill allows former soldiers to seek further education. Colleen took her data and modified it to create a transition program for former soldiers trying to finish college.  The University of Michigan sponsored a collaboration of the top 25 MBA schools (another SIFT Coalition goal) and Colleen was part of this panel.

Through grit, determination, perseverance, and divine intervention, Colleen had made so many connections and had so many doors opened for her, she at one point had to use strings on a wall to truly visualize all the connections.

By late 2013 she had developed work books, training manuals and material to guide corporate trainers. Having run out of the ability to personally fund the work she was doing, the economic reality of having a full time paying position took over.  I think of a gardener who scratches the hard ground to ultimately build a beautiful flowering garden. Like many of us, who want to protect our turf, Colleen had to decide to share her wisdom, experience and curriculum without consideration for economic reward. Overcoming the feelings of disillusionment and not seeing her dream blossom to the reality she envisioned took trust in God as she sees Him. Colleen had concluded that to reach as many vets as possible, she had to give her information away to whoever wanted it. That is when a major event occurred.

Late 2016, Colleen was asked to share what she had with another group of former special operators, The Trident Group. Colleen met them in their offices, like she had several times before, only this time she placed several large plastic tubs of data on their conference room table, and said, “Here is everything I have accumulated, all the research, all the notes, contacts, and everything I have worked on for the last 7 years “.  Invited to share the full story of her journey to these valorous men sitting around the table, one of them stopped her and said “your work saved my best friend’s life”. He thought, like so many, he would not have sought help had the stigma of “D” for disorder not been dropped because of the contribution Colleen had made to remove it.

As the meeting ended this group of former Special Forces decided they wanted to give Colleen a special badge of honor. That honor is to have your fellow warriors give you a call sign. Days later she received notice signed by all in attendance giving her the call sign SAVAGE-Saving American Veterans Giving Everything.

I felt this story was a good example of how I envision SIFT Coalition might make a difference. Take your visions further with collaboration and mentorship from others.