On vacation this past summer, we were able to visit an active open iron ore mining operation.  The mine 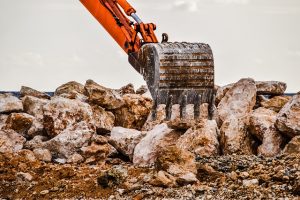 has been operating continually for over 100 years.  Looking to the left, you could see now depleted areas largely overgrown in green.  Ahead, we observed an operation that was moving dirt to a rampart, about 1 mile away.

As a child I loved playing with and sitting upon my Tonka trucks.  I have got to say, as an adult, these earth moving trucks to were much bigger than I imagined back then. There is one in the observation center that you can explore.

Just standing next to the tires one realizes they are about twice the size of an average person.  The engine is bigger than a Toyota Yaris.

It always amazes me the creativity of mankind.

In fact, the rampart is being built to allow equipment to mine the observation area we were standing upon.  This is the next most fertile area to obtain the iron ore for melting.  Next year, this will be an active part of the mine.

Ore is then shipped by rail to iron ore ships on the Great Lakes and taken to smelting operations on Lake Erie.  That iron ore we observed could be my next appliance, car or file cabinet.

What a miracle our economic chain!  So many countries in history have tried to manage economies and failed.  For some reason Nikita Khrushchev came to mind while standing on that windy hill overlooking the mine.

A powerful example of Khrushchev government control was the Berlin Wall.  In the book Free People, Free Markets by George Melloan, on pg. 80 he describes the reality:

“This was in a sense an aggressive act, as there had been no agreement under the Yalta pact or any other negotiation that East Berlin could be fortified.  But its true purpose was not aggression.  Rather, the communist regime in East Germany was concerned about the number of workers fleeing to the West to gain jobs and opportunities not available in the moribund, part directed, centrally planned economy that had been established, under Soviet compulsion, in the East.”

We all know what finally happened to the Berlin Wall!  Why?  Because we still encourage and reward innovation.  In spite of greater regulations and a central government that continues to push for “we know how to do it better” attitude, i.e. the post office, we prosper.

People like you and I wake up with a vision.  We research options, sacrifice, scrap and work way more than “40 hours” each week.  With a few breaks and some people believing in us, we survive, employ and prosper.

Maybe we should talk more about and create a more accepting environment for S-E-P (survive- employ- and prosper).  We are all connected by what each of us contributes to the greater economic good.

Thank you for your efforts.