I’ll admit I am not much of a football fan, but my wife graduated from Ohio State so I had to learn to 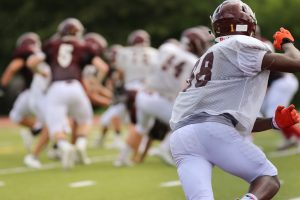 watch at least the important games to be able to spend time with her. As we watched the final 2018 championship game last week, I was amazed at the guts it took for Nick Saban, coach of the University of Alabama team, to change quarterbacks at half-time.

Making big changes at critical times isn’t easy, but it’s often necessary in  order for your business to thrive. As a small business mentor, I’m always finding examples in other areas of life that entrepreneurs and business owners can apply to their own businesses.

Here are few of my takeaways from the game that any business owner would do well to contemplate:

Has there been a time in your journey where you continued to pursue an initiative because you saw the potential or because you were emotionally tied to it? It is so easy to be distracted by the shiny bits and not keep your focus on your core competencies.

When I first started working with business owners many years ago, it was stimulating and drew my interest.  It took me a while to find my rhythm in working with them on process improvement, exiting their company, how to make their company more attractive to a potential buyer in the future, and all of the things that must be planned as part of a good exit strategy.

It was a slower sales process and I had to be willing to give up immediate revenue for future revenue potential with this new endeavor.  Over time, we settled in on those areas where we could provide the most value and refer out those areas where others have built a better mouse trap.

We found a balance between short-term “keeps the lights on” revenue and stalking the bigger cases that provide a lot of intellectual stimulation due to their complexity and challenge.

One thing I noticed at the end of the championship game was that the starting QB, Jalen Hurts, was supportive of the whole team effort and he seemed genuinely happy that the team had won. He wasn’t sulking around about not playing the full second half. Saban put him in when it made sense. Tua Tagovailoa gave credit to God and his teammates for the win.

It must be hard to be a coach and have your career dependent on the individual decisions of these young players, some of whom were true freshmen. Saban can’t throw the ball or make a tackle. It’s up to him to teach the players how to run the plays and then let them do it on the field.

How many times do we as owners want to step back in and run the ball? Build a strong team and let them run.

There have been times where we have seen a company grow too dependent on a single star sales person only to have that person move on for a bigger bonus.

In one sad case, the star sales person shut the owner out of customer contact and took those clients and started up a competitive business. I know of more than one instance where the sales people started to divert business to a side company while still making some sales for their employer.

In both cases, legal action was taken but it’s a slow and distracting process that has a big negative impact on both sales and morale. When trust is broken, it’s hard to make a comeback.

What Nick Saban has done is built a team that is not dependent on a single star.

When making decisions that impact the staff, I always try to be sensitive to how this will affect the way they do their work. Recently, we made some changes of where people sit and who they are next to. You’d be surprised at how prickly people can be when their routine is disrupted. However, enlisting their input in the outcome made a big difference in how it all worked out.

Sometimes, as the owner, you just have to step back and punt, as it is hard to please everyone all the time.

Our goal is to provide the best possible service and result for our clients and when we keep that in the forefront, things seem to go smoother.

Now, on to the Super Bowl!